We turn our thoughts to March 23, 1975, when Bill and BGP, with just a month’s notice, organized an all-star “benefit extravaganza” to raise funds needed by San Francisco public schools faced with fiscal cutbacks, in order to continue after-school sports and other extra-curricular activities. Entitled S.N.A.C.K. Sunday (“Students Need Activities, Culture and Kicks”), the event was held at the 60,000-seat Kezar Stadium, with tickets priced at $5.

The day featured appearances by Marlon Brando and Willie Mays, among other celebrities; a one-time-only collaboration of Bob Dylan, The Band and Neil Young; and performances by Santana, Jefferson Airplane, Jerry Garcia and Friends, Joan Baez, The Doobie Brothers, and others. The event raised more than $200,000, enough to fund San Francisco after-school programs for an entire year.

Bill was quoted at the time as saying, “We make our living from the youth of San Francisco. This is one of the ways we hope to thank them.”

S.N.A.C.K. Sunday stands as a precursor to multiple-star, mega-benefit concerts that would raise funds for various causes in years to come. 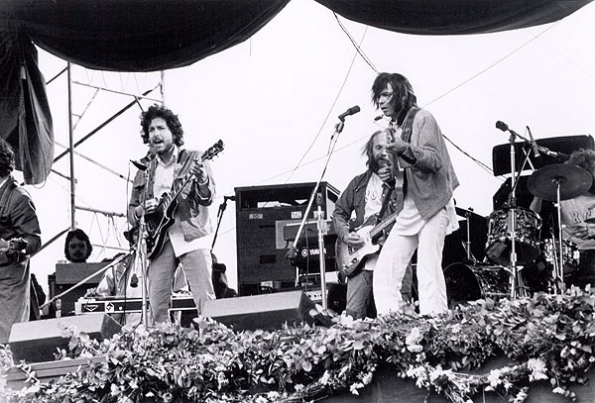 Interesting local news columns of the day and more great photos can be seen at Peter Hartlaub’s blog
“The Colombo Files: Bill Graham’s 1975 concert for the kids”- at

The picture of Bill, Francis and Marlon Brando; credited to Michael Zagaris

The live photo of Bob Dylan and the ticket; credited to Richard McCaffrey