YOUR SPECIAL EVENT TICKETS INCLUDE:

Tribute tickets to this game are available in several sections of the ball park. Choose the section you prefer at time of purchase. All tickets are subject to dynamic pricing – rates can fluctuate based on factors affecting supply and demand.

We highly recommend that you buy early and save.

Lock in your price and location today!To get your tickets or for more information, please call 415-972-2298 or visit: www.sfgiants.com/specialevents and click on the Bill Graham Tribute Night on the calendar

For more information or to order tickets online click here.

We also have a limited number of tickets available for that evening at the Legends Club at AT&T Park. You can join members of the Bill Graham Memorial Foundation and friends for the festivities.

Each of these VIP packages is available for $250 per/person a portion of which will benefit the Bill Graham Memorial Foundation.

For more information about these special Legends Club Box tickets, please email Cynthia at bgmfvip@slotix.com.
We would love to have you join us for the evening.

A portion of all ticket proceeds for this night will help support the Bill Graham Memorial Foundation which gives grants in the areas of music, the arts, and education, while also supporting social work, environmental protection, and spiritual and compassionate projects in our communities. 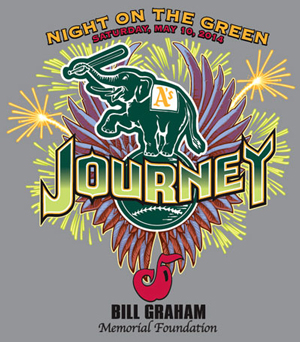 In honor of the Tribute nights, we’d like to offer a copy of this beautiful SF Giants Bill Graham Tribute Night poster as a thank you for any donation over $50 made to the Bill Graham Memorial Foundation(shipping included). We only have a very limited number of these gorgeous posters available – Make a donation.

OR Make a donation to the Bill Graham Memorial Foundation and receive a Bill Graham Bobblehead from the 2011 Bill Graham Tribute Night as a thank you from us in return! Click on our DONATE page for more information on how to get one of these rare objects!

If you would like more information about these special Legends Club Box tickets, please email Cynthia at bgmfvip@slotix.com. We would love to have you join us in the Legends Club for the evening.